Florida panther, the American crocodile, and the North American manatee,… are only 3 of the 2,000 plant and animal species you may come across in Everglades National Park. Located at the very southern tip of Florida, this national park preserves 20 percent of the American Everglades ecosystem, making it the third-largest US national park outside of Alaska. Some may see a swamp; Others, a still body of water. But the Everglades is, surprisingly, a river, the widest and slowest in America.

Everglades National Park encompasses 1.5 million acres of subtropical wilderness with exceptional beauty. Since the park covers such a vast area of an unparalleled landscape, planning before your visit is a must. Check out our detailed guide to this renowned World Heritage site here!

Human settlement’s evidence in the Everglades dates back thousands of years. The region incorporates a rich history of human culture, from the initial inhabitants known as the Calusa Indians, to modern-day Native American tribes, such as the Miccosukee and the Seminole.

Colonial settlers, the “Gladesmen”, saw the Everglades as potential farmland. In the 1800s, developers began altering the wetland landscapes by draining and dredging the river, but only until the early 20th century, did the harmful side effects of agricultural activities in this land become apparent.

The work to preserve the Everglades started almost 20 years before the park was officially founded. Royal Palm State Park was created in 1916; it included a visitor center not far from Homestead and several trails. In 1913, naturalists in Miami proposed that the Everglades become a national park.

In 1928, Ernest Coe, a landscape architect, first attempted to designate a national park in south Florida. His persistence paid off when Congress passed legislation on May 30, 1934, to establish Everglades National Park. However, 13 more years of hard work were spent to acquire the park’s land.

In 1976, UNESCO designated the Everglades a Biosphere Reserve and in 1979, a World Heritage site. The park’s area has been added several times since, with the most recent expansion in 1989. It was on the List of World Heritage in Danger from 1993 until 2007 and again in 2010. 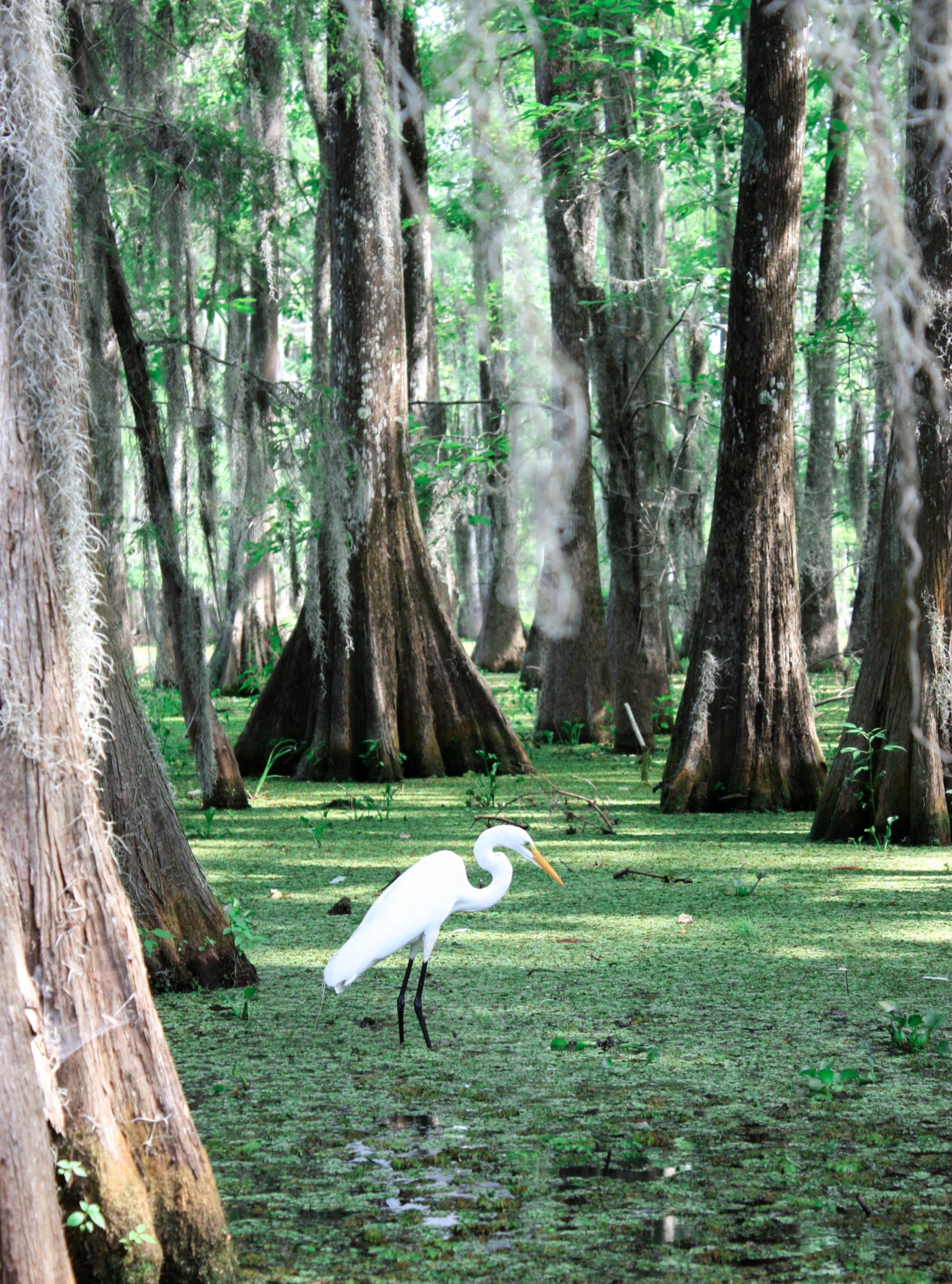 Lowest point: sea level at the Gulf of Mexico

Entrance fee: $25 per vehicle per week

South Florida and America’s Everglades have a “tropical savanna” climate, meaning there are only two seasons – wet and dry.

The “wet” season, which coincides with hurricane season, lasts from April to November with temperatures ranging into the low 90s degrees Fahrenheit (30 to 35 degrees Celsius). The humidity this time of year is very high, normally 90% or above. The average amount of rain is between 53 and 100 inches. At times, thunderstorms can be an almost daily occurrence.

The “dry” season is from December to March with temperatures ranging from 53 degrees to 77 degrees Fahrenheit (11.7 to 25 degrees Celsius).

The Everglades receives a staggering average of 60 inches of rain a year.

The dry season (November to March) attracts the largest variety of wading birds and their predators. It’s the best time of the year to visit the park and its wildlife. Breezy winter weather conditions can make perceived temperatures much lower than what the thermometer reads.

The rest of the year falls into the wet season. The park can be extremely uncomfortable during this time, due to high temperatures, humidity, and armies of mosquitoes. Adding up to the normal discomforts of the wet season, the Atlantic Hurricane Season, running from June through November, can cause problems like temporary closings of the park, unavailability of ranger programs,… which is why it is important to check the schedule for ranger programs in advance. 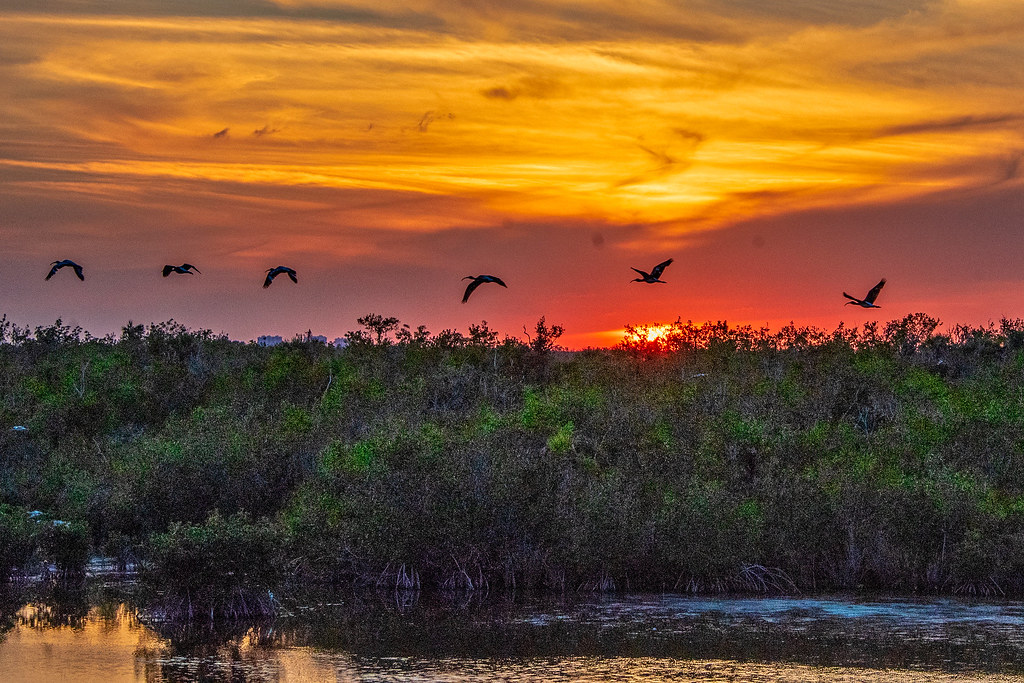 There are a lot of areas to discover in the Everglades, so it is vital to be prepared.

Park visitors need to be aware of the heat index which indicates the felt air temperature.

Recommended clothing in the wet season is shorts and a tank top. Also, make sure you have lots of drinking water in such high heat. If you go for the safe and common choice of visiting Everglades National Park in the dry season, you are good to go with a t-shirt and shorts, but also bring along a sweater or sweatshirt for cooler temperatures.

No matter which season you visit the park, mosquito spray, and insect repellent are your good friends!

You might want to take a look at our comprehensive Day Hiking Checklist to plan gear items for a day in Everglades National Park.

What to Do in Everglades National Park

Because of its vast and diverse wetlands, Everglades National Park offers a wide range of activities. From taking a short walk on the Anhinga Trail for spotting wildlife; paddling amongst the mangroves; climbing atop Shark Valley observation tower for a bird’s eye view of the glades; to gliding over Florida Bay by tour boat or kayak for a chance to glimpse crocodiles, dolphins, or manatees, ‘The Glades’ does not disappoint!

We sum up popular recreational activities in the Everglades here!

Since the majority of Everglades National Park is underwater and inaccessible on foot, there are only a few hiking trails at the visitor centers, which are short walks with no elevation change.

The Shark Valley trail is accessible from Miami, off of U.S. 41, while the Pine Island and Flamingo trails are closer to the park’s main entrance in Homestead, Florida.

You might want to have a look at outdoor navigation skills before your adventure. More information on backpacking in the park and on the public land nearby is available from the National Park Service. 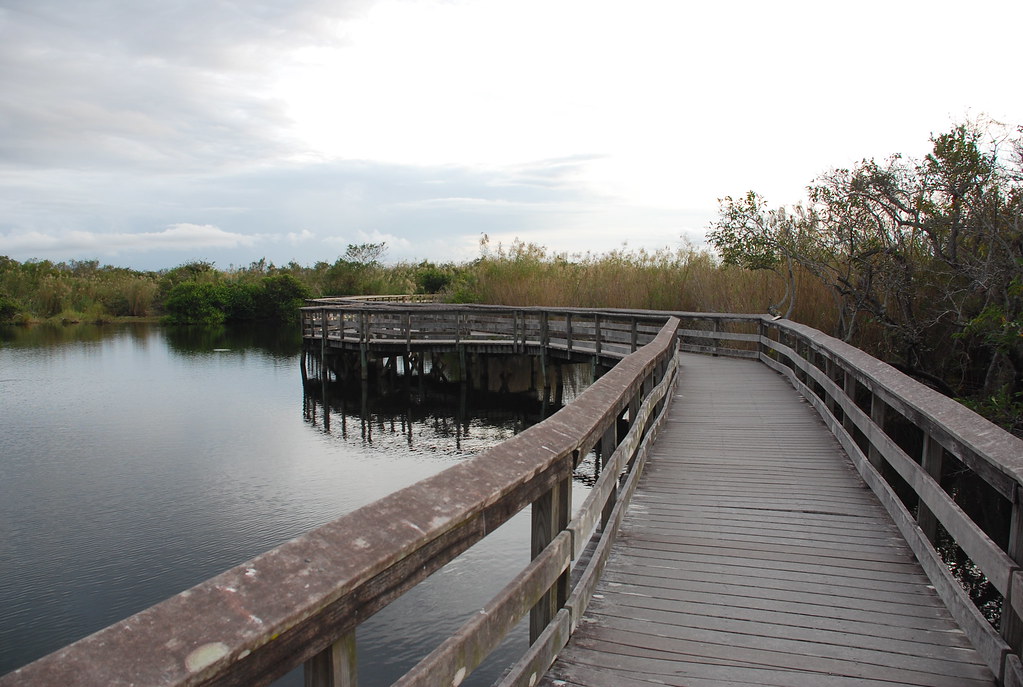 Gliding in a canoe or kayak gives you a wonderful vantage point on the wildlife and vegetation of the “glades”. You might even get an up close view of a “gator”!

The park is popular with boating and canoeing enthusiasts; there are several marked canoe trails, including the 99-mile (159-km) Wilderness Waterway along the park’s western side that takes 7-10 days to complete! In addition, private companies offer guided tram and boat tours in portions of the park.

If you are feeling extra adventurous, experience a side of the Everglades that most people never see by joining a ranger-led hike called slough slogging – where you’ll be waist-deep in the pristine Florida swamp.

Boats can be chartered at Flamingo. Be sure to check a visitor center for park fishing regulations and closed areas. 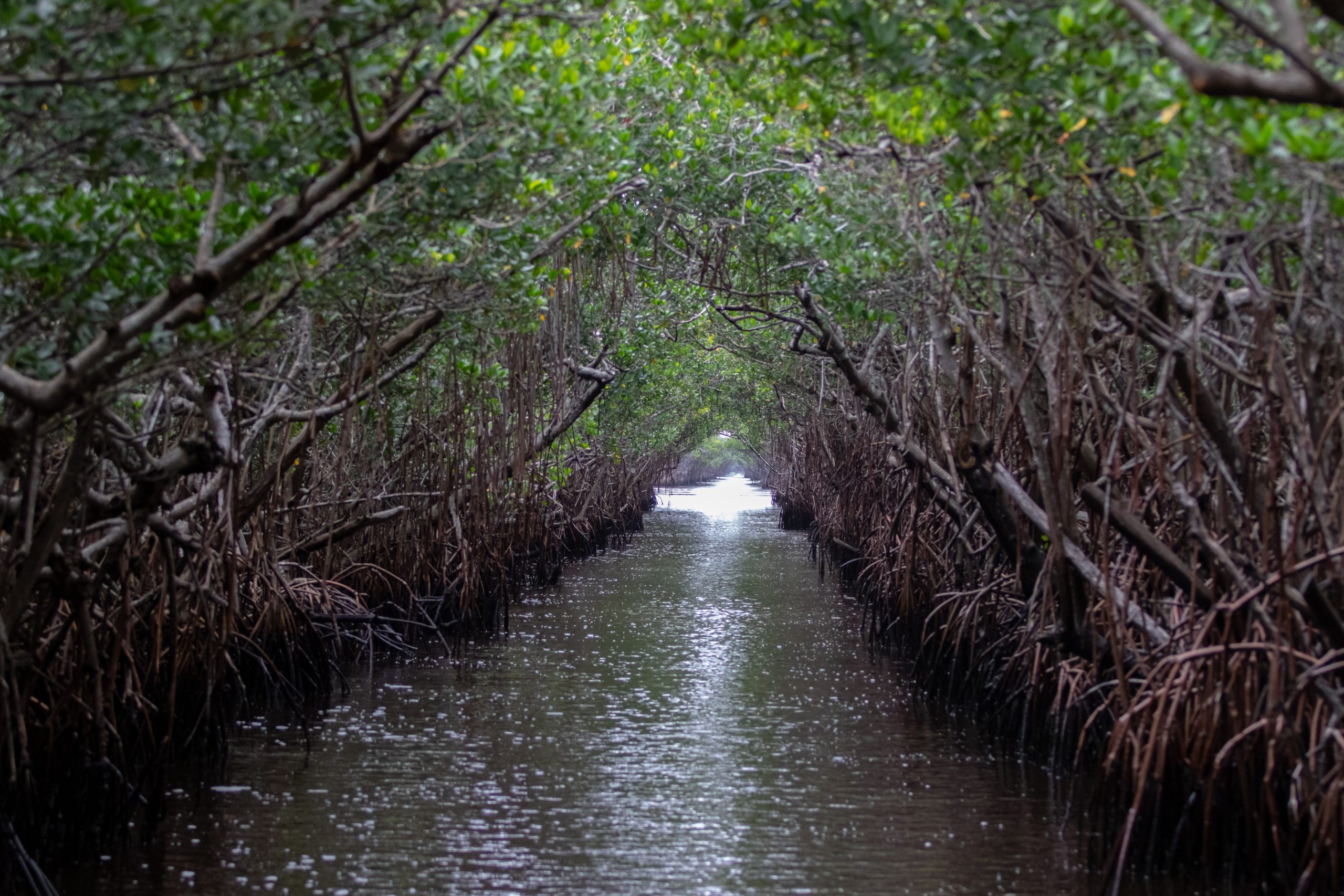 There are two developed campgrounds in the Everglades National Park frontcountry.

Flamingo Campground lies at the end of the road, past the visitor center and located alongside Florida Bay. In the busy winter season, it is quite popular and should be reserved in advance. During the summer, some of the campgrounds close.

Long Pine Key Campground is much closer to the park entrance and the popular Royal Palm area. It also tends to be a lot quieter than the Flamingo Campground. However, it closes completely in the offseason.

As for overnight camping in the backcountry, you’ll need wilderness permits. There is a $21 administrative fee plus an additional $2 per person, per night use fee. Most wilderness campsites in Everglades National Park are only accessible by water. No campfires are allowed, so use portable grills and stoves fueled with gas or propane for cooking.

Use the Wilderness Trip Planner to ensure you are fully prepared for your backcountry adventure!

The Everglades is the most significant breeding grounds for tropical wading birds in North America. During the dry months, wading birds congregate here to feed and nest, making bird watching one of the most rewarding activities in the Everglades.

Everglades National Park is also an important part of the Great Florida Birding Trail. It has great biodiversity and many species of birds for bird watching and bird photography. Some popular bird watching destinations are: on trails starting from the main entrance in Homestead, Florida; The Gulf Coast; the Shark River Slough.

Bicycling is permitted along the main park roads, on the Shark Valley tram road, the Old Ingraham Highway, Long Pine Key Nature Trail, and the Snake Bight and Rowdy Bend trails at Flamingo.

Shark Valley is by far the most popular destination for bicyclists with the 15-mile paved scenic loop that provides excellent opportunities to view wildlife.

Portions of Everglades National Park are ideal for dark sky observations in South Florida. The best viewing locations are in the remote southern and western areas of the Everglades, such as Flamingo and the Ten Thousand Islands. The Milky Way appears brightest when looking south, toward the least light-polluted areas.

Everglades National Park has no lodging inside the park boundaries. The Flamingo Lodge, formerly located at the end of the Main Park Road, has been closed for years due to severe hurricane damage and is not expected to reopen.

However, the surrounding area is loaded with lodging options. The cities of Homestead and Florida City are the closest to the park. The main part of Everglades is slightly closer to Florida City, which offers hundreds of hotels.

The Everglades National Park spans across 1.5 million acres that stretches over the southern part of Florida, but it is relatively easy to access the park’s main areas. The northern section of the park is accessible via Miami or Everglades City, the southern section is accessible through Homestead. A car is needed to reach all the park access points. There are four park visitor centers:

The Shark Valley Visitor Center is located on US 41, or the Tamiami Trail. It sits on the northern edge of “the River of Grass”. It is about 40 miles from Miami, making it a reasonable day trip from the largest city in Florida. This Visitor center offers nearly immediate animal sightings, including alligators sunbathing right at the entrance drive.

The Gulf Coast Visitor Center is the access point to the Ten Thousand Islands, a network of mangrove islands that starts at Marco Island and stretches down the rest of the west coast.

Flamingo Visitor Center sits at the end of State Road 9336, where it meets the Gulf of Mexico at Florida Bay. Once you reach the water’s edge, it’s possible to spot manatees, dolphins, and wild flamingos. More developed than you might expect given its remote location, this Center has a snack bar, a marina store, bathrooms, boat tours and rentals, a campground, and a gas station!

Everglades National Park allows you to explore a diversity of ecosystems: freshwater sloughs, pinelands, mangroves, coastal lowlands, marine,… hence guarantees abundant animal sightings. We hope this guide has provided you a basic grasp of what to do and see in the vast landscape of this World Heritage site.

Don’t forget to check out our other national park guides to start planning your next adventure.